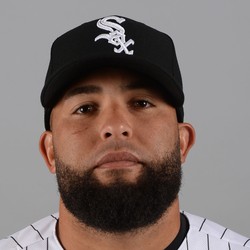 The White Sox have signed reliever Kelvin Herrera to a two-year deal worth $18M.

Herrera has spent most of his career with the Kansas City Royals, where he appeared in a career high 76 games in 2012. He also recorded 52 saves over the last three seasons. Herrera appeared in 21 games with the Nationals last season, but struggled with them as his 4.34 ERA would suggest. Herrera gives the White Sox another option deep in games, and if he assumes closing duties, he'll become very valuable for fantasy purposes. He may have to overcome the likes of Jace Fry and Nate Jones first, but he undoubtably gives the White Sox bullpen some more depth.

Kelvin Herrera has agreed to a two-year, $18 million deal with the White Sox. The deal has a third-year vesting option.

Herrera finished last year with 17 saves and a 2.44 ERA splitting his season between the Royals and the Nationals. He ended the season on the disabled list after tearing a Lisfranc ligament in his left foot, but there's no indication that he'll miss any time in Spring Training. Herrera has a good shot to close for the White Sox, with Alex Colome the only other legitimate option. If so, he'll be a decent late-round option for fantasy owners looking to go cheap on saves.

The Nationals placed Kelvin Herrera on the 10-day disabled list on Monday with a Lisfranc torn ligament in his left foot. He is likely to miss the rest of the season.

It's a tough break for Herrera, who will be a free agent next season. Ryan Madson, who was activated from the disabled list to take Herrera's spot, is likely to see save opportunities going forward, as Koda Glover has struggled.

Kelvin Herrera (foot) was carted off the field after suffering a foot injury in the ninth inning of the Nationals' 15-0 win over the Mets.

Herrera was running towards first base to get an out and pulled up lame, limping his way to the bag and eventually leaving the game. The irony of it all is that Herrera was protecting a 15 run lead and only trying to get maintenance work in since he hadn't pitched since Tuesday. He will get x-rays either today or tomorrow, but this injury will likely result in another trip to the disabled list.

Kelvin Herrera threw a perfect ninth inning in the Nationals' 10-4 win over the Phillies on Tuesday. He struck out one.

Herrera went exactly two weeks between appearances due to a shoulder injury. The injury was initially thought to be more serious so it's rather fortunate that Herrera is back so soon. He'll assume the closer's role in Washington until Sean Doolittle returns, making him a good player to add in the short-term.