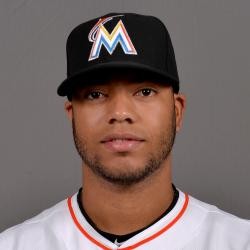 Bour needed to come off the 60-day disabled list and the Marlins thought Flores would be the most expendable previous member of the roster. He likely won't clear waivers, but he wasn't going to make much of an impact with the Marlins anyway.

Flores was up as the 26th man to start Saturday's double header, but had to leave the game after the third inning. The severity of his injury is unclear at this time.

Miami Marlins pitcher Kendry Flores, making a spot start in the second game of Saturday's double header, was forced to leave early due to a shoulder strain. He had pitched three innings, allowing one hit and three walks.

Just what the Marlins needed after a short start in Game One of the twin bill. The Marlins bullpen will likely be shot after this one and it wouldn't be surprising to see a transaction made to bring a fresh arm in before tomorrow's game.

The Miami Marlins will call up right hander Kendry Flores to start one of the games of Saturday's double header against the Washington Nationals.

Flores has gone 1-1 with a 2.59 ERA for Triple-A New Orleans so far this season and has a career 4.97 MLB ERA in 12 2/3 innings. He's a replacement level pitcher at best, but currently in the top ten list for Marlins prospects due to the barrenness of the system. He's not a fantasy asset.

Flores has been working out of the bullpen and had recently joined the starting rotation. He shouldn't have been on any fantasy rosters to begin with, but anyone holding onto him can safely drop him now.