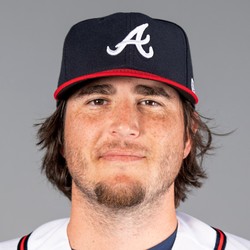 Braves reliever Luke Jackson allowed two earned runs on two hits while failing to record an out in the team's win over the Nationals on Wednesday.

With the Braves bringing in Shane Greene and Mark Melancon ahead of yesterday's trade deadline, Jackson may have finally pitched himself out of the closer's role in Atlanta. Expect Greene to take over as closer with Melancon and Jackson serving in setup duty.

Braves reliever Luke Jackson blew his seventh save of the season on Friday, allowing a two-run home run to Nationals outfielder Victor Robles in the ninth inning.

Jackson did manage to finish the inning and was rewarded with a win when the Braves walked things off in the bottom half, but he has now blown seven saves on the year. If Atlanta adds any reinforcements over the next two weeks, it would not be surprising to see Jackson demoted from the closer's role.

Braves closer Luke Jackson struck out two in a scoreless inning to earn his 17th save of the season in Monday's win over the Brewers.

Jackson had allowed a run in each of his previous two outings but bounced back with a scoreless performance on Monday. He remains the closer in Atlanta, though that could change as we get closer to the trade deadline.

Braves closer Luke Jackson allowed one earned run on one hit and one walk while striking out two over one inning of work to earn his 15th save of the season in Friday's win over the Padres.

Jackson has emerged as the closer in Atlanta this season and appears to be locked into that role after some early struggles. He now has 15 saves to go with a 2.80 ERA and 61 strikeouts over 45 innings.

Braves closer Luke Jackson allowed three hits and a walk but managed to pitch a scoreless inning to earn his 14th save of the season in Sunday's win over the Marlins.

Jackson has emerged as the closer in Atlanta despite some early struggles and now has 14 saves to go with a 2.66 ERA and 59 strikeouts over 44 innings.