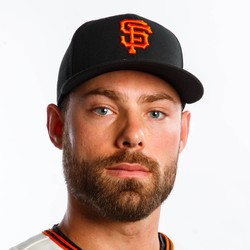 Mac Williamson went 0-for-5 with five strikeouts in the Giants' loss to the Braves on Thursday.

It's been a real struggle for Williamson since he got recalled. The outfielder is hitting .128 with a .439 OPS for the lowly Giants. Obviously he doesn't require your attention in fantasy.

Mac Williamson went 0-for-3 in Monday's loss to the Braves.

The entire Giants offense struggled versus Mike Soroka tonight. Williamson has done little since being recalled, however, and is hitting just .154 with a .506 OPS. He can be left on your waiver wire.

Mac Williamson went 2-for-4 with a homer, four RBI, and two runs scored in the Giants' 14-4 victory over the Rockies on Tuesday.

Williamson was designated for assignment prior to the season but was recalled prior to Tuesday's game to help ignite a struggling San Francisco offense. He's worth an add in deeper formats.

Williamson ultimately lost out on becoming the Giants' fourth outfielder this year. He'll report to Triple-A unless he gets claimed by another team.

Mac Williamson went 1-for-3 with a solo home run on Thursday against the Marlins. It was his fourth home run of the season.

Williamson hasn't been great since returning from the disabled list, so it was good to see him finally hit with some of the power that he showed earlier in the season. He's not established enough to earn a spot in your starting lineup while he's cold, but keep him owned and be ready to deploy him if he does indeed heat up.