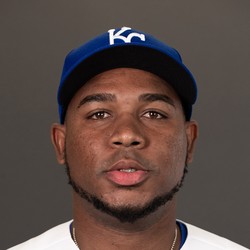 Kansas City Royals third baseman Maikel Franco went 3-for-3 with a homer and four RBI in a 6-4 Cactus League win over the Diamondbacks on Tuesday.

Franco had a down year with the Phillies in 2019 but he hit 71 homers from 2016-2018. He has a shot at bouncing back as KC's projected everyday third baseman.

Heyman adds that Franco could earn an additional $1 million in performance incentives. The 27-year-old third baseman was non-tendered by the Phillies earlier this winter after batting .234/.297/.409 in 2019. He'll likely open the 2020 season as the Royals' everyday third baseman.

Third baseman Maikel Franco was non-tendered by the Phillies on Monday and is now a free agent.

The third base job was Franco's to lose in 2019, and he promptly lost it after a hot start. After hitting .252 with seven home runs in the first month of the season, he hit .170 in May. After somewhat bouncing back in June and July, Franco eventually found himself demoted to the minor leagues.

The Phillies optioned Maikel Franco to Triple-A on Monday.

Franco went 2-for-6 this weekend while filling in for Bryce Harper (paternity leave). The 27-year-old will likely return to the Phillies when rosters expand on September 1st.

Phillies third baseman Maikel Franco was optioned to Triple-A Lehigh Valley on Sunday, according to multiple reports. Infielder Brad Miller has been reinstated from the 10-day IL to take Franco's spot on the roster.

After a brief hot start to the season, Franco quickly regressed and has batted .231 with 15 home runs, 41 runs scored, and 47 RBIs through 333 at-bats. Scott Kingery and Brad Miller should see regular time at third base with Franco sent down.

Mike Maher - The Birds Blitz49 weeks ago
Who Should I Draft?
Do Not Sell
Are you looking to contact Customer Support about a subscription or account related question?
Yes
No, I'm a California resident looking for the California Consumer Privacy Act form