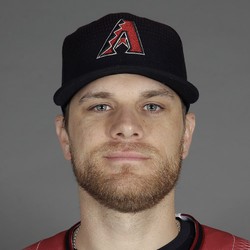 Matt Koch allowed two runs on three hits and a walk over six innings in Thursday's win over the Mets. He struck out five and moved to 5-3.

There are few better matchups for an opposing pitcher right now than the Mets, so take Koch's effort with a grain of salt. He remains purely a matchup play, though his WHIP (1.17) can help fantasy owners if they are strong in the other categories.

Matt Koch allowed seven runs (five earned) on eight hits and a walk over five innings on Saturday against the Rockies. He struck out two and did not factor into the decision.

It wasn't a surprise to see Koch get hit hard in Coors Field, as he doesn't have the raw power stuff that usually plays well in the venue. Koch's abysmal strikeout rate (33 in 60 innings) makes him irrelevant for everything but NL-only leagues, despite his decent ratios.

Dan Harris2 years ago
Matt Koch shuts down the Marlins

Matt Koch pitched seven scoreless innings on Sunday against the Marlins, allowing just three hits while striking out six. He earned the victory to move to 4-3 on the season.

Those who started Koch for his two-start week got two wins out of it, and managed to escape largely unscathed otherwise. Koch doesn't have the raw stuff or the strikeout ability to warrant fantasy consideration in anything but the best matchups, so he's better left on the waiver wire, even after this tremendous start.

Matt Koch allowed five runs on 11 hits and a walk over five innings in Monday's win over the Reds. He did not strike out a batter.

Koch was staked to a big lead and nearly gave it all back, but managed to escape with the win. His lack of strikeout upside makes him a matchup play at best, but as today showed, even with a soft opponent he's far from a guarantee. He'll take on the Marlins in his next start.

Matt Koch allowed one run on three hits and three walks over 5 1/3 innings on Tuesday against the Brewers. He struck out five but took the loss, falling to 2-3 on the season.

This was an excellent bounce-back effort from Koch, who was torched for eight runs in just 4 1/3 innings against these same Brewers last week. With a middling strikeout rate, Koch offers little upside, and is best left on the waiver wire absent NL-only leagues.

Dan Harris2 years ago
Who Should I Draft?
Do Not Sell
Are you looking to contact Customer Support about a subscription or account related question?
Yes
No, I'm a California resident looking for the California Consumer Privacy Act form