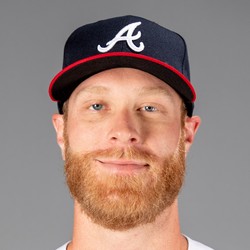 Mike Foltynewicz allowed one hit and two walks while striking out six over 3 2/3 innings Saturday against the Rays.

Folty needed a good spring outing after his implosion against the Red Sox. The man has excellent stuff, no doubt. But can he become consistent, can he control his emotions? The answer will determine how 2020 and beyond go for him.

Mike Foltynewicz, who had a good outing last Tuesday, imploded Sunday against the Red Sox. Over 1 1/3 innings, he allowed four hits, three runs (all earned), and two walks. One of the hits was a home run, and he did record one strikeout.

Folty can look really good on some days and then really bad on others. He is locked into the starting rotation so hopefully, days like today are just minor blips on the radar.

Mike Foltynewicz went two innings in his spring debut Tuesday, allowing one hit and recording two strikeouts. His changeup and curve were sharp and he made one mistake pitch with his fastball, a towering solo home run.

Folty looked sharp today, a terrific start to the '20 campaign. He's locked into the starting rotation and the Braves are hoping for a strong season from him.

Braves starter Mike Foltynewicz allowed three earned runs on three hits and one walk while striking out five over four innings in Saturday's loss to the New York Mets.

Foltynewicz only went four innings on Saturday as the Braves clearly had him on a pitch count as they head into the playoffs. He finishes the regular season with a 4.54 ERA over 117 innings but has been pitching much better than his overall numbers show over the last month of the season.

Foltynewicz has now won four consecutive starts while allowing just two earned runs over 26 innings over that span. After struggling earlier in the season to the point that he was sent down to the minors, Foltynewicz is hitting his stride as the Braves head into the postseason. He will take a 4.46 ERA into his last start of the season against the Mets in New York.