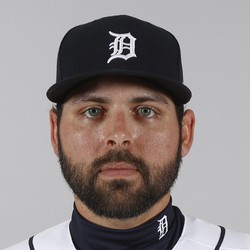 Michael Fulmer (elbow) has been cleared for full baseball activity.

Fulmer underwent Tommy John surgery last March and was set to miss the first couple of months this year. However, he will now be ready to go once "summer training" gets underway. The Tigers will understandably be cautious with the right-hander's innings.

When asked if Fulmer was close to throwing to live hitters, Anderson's exact words were "no chance". However, that is partially due to the interference of the coronavirus pandemic as Fulmer currently has nobody to throw to. The 27-year-old is 14 months removed from Tommy John surgery and is reportedly pain free. Expect him to start throwing bullpens whenever Spring Training 2.0 gets underway.

The Tigers have placed Michael Fulmer (elbow) on the 60-day injured list.

Fulmer underwent Tommy John surgery last week and is expected to miss the entire 2019 season plus the beginning of 2020. The 26-year-old hasn't been effective in recent seasons as he was when he won the Rookie of the Year award in 2016, but he would've been one of Detroit's best trade chips this summer.

Detroit Tigers starting pitcher Michael Fulmer has been recommended for Tommy John surgery after undergoing MRI and consulting with Dr. James Andrews, the team announced on Twitter on Tuesday. Fulmer is seeking a third opinion.

Fulmer had experienced soreness in his right elbow after a bullpen session, and his velocity has been noticeably lower this Spring. Now, it appears that he is likely to be shut down for an entire year and will not be seen until sometime in 2020.

The Detroit Tigers are shutting down right-hander Michael Fulmer indefinitely so he can work on his "lower-body mechanics." Fulmer was originally slated to take the mound on Friday in a spring training game but will be replaced.

According to manager Ron Gardenhire, "He took a step back to refine his lower-body mechanics. We have no timetable on when he's going to get back on the mound." When asked whether he was dealing with an injury, Gardenhire remained vague, repeating his previous statement. Fulmer has a 7.88 ERA in eight innings of work this spring. He will be tough to trust in fantasy drafts until there is more information available.

Matthew Terelle1 year ago
Who Should I Draft?
Do Not Sell
Are you looking to contact Customer Support about a subscription or account related question?
Yes
No, I'm a California resident looking for the California Consumer Privacy Act form