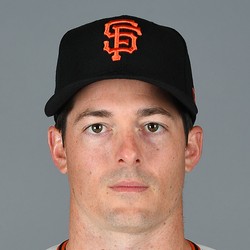 Mike Yastrzemski hit his 21st homer of the year in Thursday's 8-3 win over the Rockies.

"Baby Yaz" came off the bench in this one and finished 2-for-3 with the homer, a double, two RBI, and two runs scored. The 28-year-old has had a phenomenal season, posting an .860 OPS with the aforementioned 21 homers.

Mike Yastrzemski went 2-for-4 with a double and a walk in the Giants' 4-1 win over the Braves on Sunday.

Yastrzemski is now riding a six-game hitting streak that has raised his average 10 point to .275 for the year. He has been one of the lone bright spots for the Giants this year, totaling 20 homers and an .856 OPS in 101 games thus far.

Mike Yastrzemski went 2-for-7 with a homer, a double, a walk, and two runs scored in the Giants' 15-inning win over the Red Sox on Tuesday.

Yastrzemski received a standing ovation for his first at-bat, as his grandfather is one of the most beloved Red Sox players of all time. The 29-year-old is creating his own legacy, however, posting an .841 OPS with 20 homers in a breakout season. He has certainly helped fantasy owners this year.

Mike Yastremzski went 1-for-4 in Wednesday's 6-3 loss to the Pirates.

It has been a quiet week for Yaz but that shouldn't overshadow the phenomenal season he has had. The 28-year-old has hit .268 with 19 homers and an .852 OPS in just 92 games this year. He mainly leads off for the Giants these days, particularly against right-handers.

Mike Yastrzemski is absent from Saturday's lineup agains the Padres.

Yaz takes a seat with the Padres throwing a left in Joey Lucchesi. The 29-year-old has been fantastic this season, posting an .855 OPS with 18 homers in 81 games.

Brendan Tuma - Too Much Tuma45 weeks ago
Who Should I Draft?
Do Not Sell
Are you looking to contact Customer Support about a subscription or account related question?
Yes
No, I'm a California resident looking for the California Consumer Privacy Act form