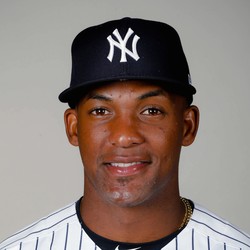 Andujar will then play the outfield later this week as the Yankees attempt to expose him to multiple positions this spring. The 24-year-old is coming off labrum surgery in his shoulder but is expected to be ready for Opening Day.

Yankees manager Aaron Boone says Miguel Andujar (shoulder) is expected to be ready for the start of spring training.

Andujar's shoulder is reportedly "feeling good". The 24-year-old was limited to just 12 games last season due to the serious injury. It's likely the Yankees will ease him back in and it's unclear if he'll have an everyday job right away. His status will be important to monitor come spring.

Yankees GM Brian Cashman says a position change could be in store for Miguel Andujar.

Andujar was limited to 12 games this past season as he dealt with some major shoulder issues. During that time Gio Urshela emerged as the team's everyday third baseman. Cashman mentioned first base and outfield as possible spots to get Andujar's bat into the lineup. A lot will depend on his health come spring. Andujar posted an .855 OPS with 27 homers back in 2018.

Miguel Andujar has opted to get shoulder surgery to repair his torn labrum. He will have season-ending surgery on Monday.

This isn't much of a surprise after Andujar went back on the IL. He was just 3-for-24 after returning from his first stint, so his shoulder was clearly affecting his play. Gio Urshela should continue to see time at third base for the Yankees for the time being.

Andujar's MRI came back "about identical" to the one he had the first week of April, according to manager Aaron Boone. The third baseman is expected to decide within the next 24 hours whether he will have surgery.

Andujar has been dealing with a partially torn labrum but had originally opted to play through the injury rather than go under the knife, which would almost certainly end his season. The 24-year-old, who is batting just .128 with zero extra-base hits in 49 plate appearances, will either rehab the injury or undergo surgery.