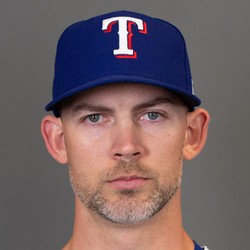 Mike Minor (14-10) allowed five earned runs on 10 hits and two walks while striking out nine across 8 2/3 innings in Thursday's 7-5 win over the Red Sox. He picked up his 14th win of the season.

Mike Minor (13-10) allowed six runs on six hits and four walks while striking out three through five innings in Friday's 8-0 loss to the Athletics. He was charged with his 10th loss of the season.

The biggest damage came in the form of a three-run homer by Chad Pinder, one of two long balls allowed by Minor. Minor owns a 3.52 ERA, 1.23 WHIP and 181:66 K:BB in 199 2/3 innings this season. His next scheduled start is Tuesday, home against the Red Sox.

Mike Minor (13-9) allowed seven runs on nine hits and three walks while striking out five through five innings in Saturday's 8-6 loss to the Athletics. He took his ninth loss of the season.

All of the runs against Minor came on three homers. He had allowed only one homer over his previous four starts combined. Minor owns a 3.33 ERA, 1.21 WHIP and 188:62 K:BB in 194 2/3 innings this season. His next scheduled start is Saturday, away against the Athletics.

Mike Minor (13-8) allowed two runs on six hits and one walk while striking out three through eight innings in Sunday's 10-4 win over the Orioles.

Minor cruised through eight innings to pick up his 13th win of the season. He has won his last two starts and has only pitched less than six innings once in his last seven appearances. Minor owns a 3.08 ERA and a career-high 183 strikeouts through 29 starts this season. His next scheduled start is Saturday, home against the Athletics.

Mike Minor (12-8) allowed five hits and a walk while striking out five through seven 1/3 scoreless innings in Monday's 7-0 win over the Yankees. He picked up his 12th win of the season.

Minor had a bounce back performance after being tagged for 13 earned runs over his last three starts (19 1/3 innings). He owns a 3.12 ERA and 180:58 K:BB through 181 2/3 innings. His next scheduled start is Saturday, away against the Orioles.