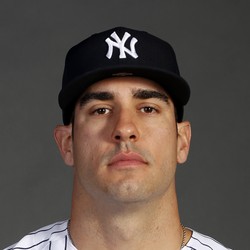 Yahoo LF,CF,RF
ESPN LF,CF
CBS LF
Mike Tauchman in the mix for role in the outfield

Mike Tauchman figures to be in the outfield/DH mix at the start of the campaign as the Yankees are likely to take a careful approach with players returning from injury, Randy Miller of NJ Advance Media reports.

Tauchman was slated to take on a near-everyday role to begin the season before play was suspended, but those plans have changed with Aaron Hicks (elbow), Aaron Judge (rib) and Giancarlo Stanton (calf) all expected to be ready to go by the new Opening Day. Look for Tauchman to make the final roster in a reserve role.

Mike Tauchman is expected to miss 6-8 weeks with a Grade 2 calf strain.

Tauchman left Sunday's game with the injury and underwent an MRI today. It's a disappointing end to the season for the 28-year-old, who played like an All-Star during his time in the big leagues. In 87 games this year Tauchman hit .277 with 13 homers and an .865 OPS. Cameron Maybin and Clint Frazier will likely see more playing time in his absence.

Mike Tauchman went 1-for-3 with a run scored on Wednesday as the Yankees beat the Rangers by a 4-1 score.

Tauchman had been red-hot in mid-August but has cooled off and is hitting just .121 over his last 10 games played. The 28-year-old outfielder is streaky and is more of a deep league own in fantasy.

Mike Tauchman went 2-for-2 with a walk and two RBI in Wednesday's 6-4 loss to the Athletics.

Tauchman has been a pleasant surprise for the Yankees this season. On the year the 28-year-old outfielder is hitting .300 with 41 runs scored, 12 home runs, 44 RBI and five stolen bases in 246 plate appearances and is worth owning in deeper fantasy leagues.

Mike Tauchman went 2-for-4 with a home run and four RBI in a 12-6 win over the Blue Jays on Thursday.

Tauchman is on fire right now and over the last seven days is hitting .417 with four home runs and 13 RBI. The 28-year-old slugger is worth adding in deeper leagues and AL-only formats while he is hot.

John Aubin48 weeks ago
Who Should I Draft?
Do Not Sell
Are you looking to contact Customer Support about a subscription or account related question?
Yes
No, I'm a California resident looking for the California Consumer Privacy Act form