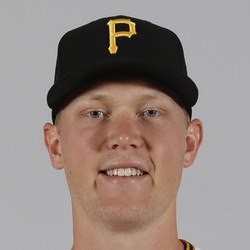 Keller yielded a two-run shot to Danny Jansen and saw his ERA rise to 7.50 across three appearances this spring. He expects to be a part of the Pirates rotation, owning a 1-5 record, 7.13 ERA, 1.83 WHIP and 65:16 K:BB across 11 starts last season. Keller has potential to be a late-round value pick, but will need to have better outings if he plans to stick in Pittsburgh's rotation.

Mitch Keller allowed one run on seven hits with two walks and seven strikeouts across five innings Tuesday against the Cubs.

Keller pitched well, but the Pirates' offense did not get on the board until the seventh inning, so he could not earn the win. Keller has shown signs of greatness, especially with strikeouts, recording 41 in 26.2 innings this season. Overall, he is 1-5 with a 7.13 ERA and 1.83 WHIP.

Mitch Keller (1-5) took the loss Tuesday against the Mariners, allowing two runs on six hits and two walks over five innings. He struck out seven.

This was a step in the right direction for Keller, who has been dreadful in a limited sample size this season. He has a brutal 7.74 ERA and 1.84 WHIP in 43 innings, but he has shown his strikeout upside by posting 58 strikeouts in that span. He lines up to start next against the Brewers on Sunday, which will likely be his last start of the season.

Mitch Keller (1-4) took the loss Tuesday against the Giants, allowing five earned runs on nine hits over five innings. He struck out seven and walked none.

Keller made his return to the mound after being struck by a line drive in his last outing. His return did not go well, as he allowed three earned runs in the first and two more in the fifth. He's only thrown 38 major league innings this season, but his results have been putrid. He's sporting a 8.29 ERA and 1.87 WHIP in his nine starts.

Mitch Keller was diagnosed with a right wrist bruise after being struck by a line drive Tuesday against the Marlins. He immediately left the game.

Keller was struck by a Garrett Cooper line drive, which registered 105 mph. Initial reports are that Keller avoided a fracture. He's currently scheduled to pitch against the Cardinals on Sunday, though it's unclear if he'll be able to make that start.

Connor Rooney45 weeks ago
Who Should I Draft?
Do Not Sell
Are you looking to contact Customer Support about a subscription or account related question?
Yes
No, I'm a California resident looking for the California Consumer Privacy Act form