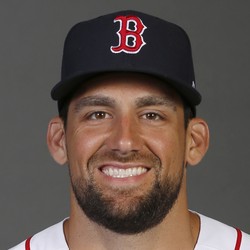 Nathan Eovaldi took the loss after giving up three runs on three hits and four walks while striking out three over five innings Friday night against the Orioles.

Eovaldi finishes up his injury-plagued season with a 2-1 record with a 5.99 ERA and 1.58 WHIP with 70 strikeouts across 67 2/3 innings. Eovaldi should have a spot secured in the rotation for 2020 but needs to remain healthy to be worth owning in fantasy.

Nathan Eovaldi allowed five earned runs on seven hits and three walks while striking out six across four innings Tuesday against the Giants. He did not factor in the decision.

Eovaldi continues to be disappointing this season for the Red Sox and fantasy owners. The 29-year-old starter owns a 6.19 ERA and 1.61 WHIP in 56 2/3 innings this season. Eovaldi will look to get back on track in his next start, currently scheduled for Sunday at Tampa Bay.

Nathan Eovaldi allowed three runs on six hits with two walks and six strikeouts across 4 1/3 innings during a no-decision against the Blue Jays on Tuesday.

Eovaldi has been looking solid on the mound and over his last three appearances has a 3.38 ERA over 13 1/3 innings. Eovaldi is scheduled to pitch next at home against the Giants on Tuesday.

Nathan Eovaldi didn't factor into the decision against the Twins on Thursday, giving up one earned run on one hit over five innings, striking out three and walking four as the Red Sox eventually fell 2-1.

Eovaldi looked good on Thursday despite the four walks that ended up leading to the only run given up on the night by the veteran righty. Fantasy owners may want to stream Eovaldi in deeper leagues in his next start when he faces the Blue Jays in Toronto.

Nathan Eovaldi allowed a run on three hits and a walk while striking out eight over four innings. He did not factor in the decision Friday versus the Angels.

Eovaldi looked better on Friday than previous appearances as the righty adjusts to returning to the starting rotation. The 29-year-old righty now has a 6.23 ERA and 1.57 WHIP over 43 1/3 innings. He is scheduled to face the Twins on Thursday for his next start.