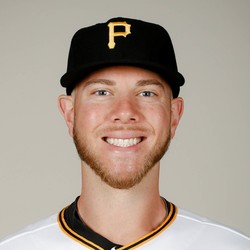 Kingham was traded to the Blue Jays on Thursday for cash considerations.

Kingham is expected to join the team for its weekend series against the Houston Astros. The 27-year-old right-hander went 1-1 with a 9.87 ERA, a 2.05 WHIP and seven home runs allowed over 34 2/3 innings; it isn't known how Toronto will use him, but you can safely leave him unowned in all fantasy formats.

Nick Kingham allowed five runs on six hits over three innings in the Pirates' 12-10 loss to the Brewers on Saturday. He walked two and struck out four in the no-decision.

It was another rough outing for Kingham, who now has an 8.91 ERA on the year. He doesn't deserve to be in a major league rotation, much less a fantasy rotation. If he makes another start, it would come Friday at Milwaukee.

Nick Kingham allowed three earned runs on seven hits with a walk and five strikeouts over 4 2/3 innings Monday in a no-decision against the Reds.

The Pirates ultimately won the game, but Kingham didn't factor into the decision since he wasn't able to reach the fifth. The game actually lowered his ERA to 8.28 on the season. Needless to say, Kingham isn't someone to consider for fantasy purposes at this point.

Nick Kingham allowed seven runs on ten hits over four innings in the Pirates' 9-3 loss to the Diamondbacks on Monday. He walked one and struck out two while falling to 1-1.

The Diamondbacks were all over Kingham in this one, knocking five extra-base hits off him in four innings. Kingham isn't really starter material, and his days in Pittsburgh's rotation could be over after this performance. If he got another start it would likely come Sunday at San Diego.

Nick Kingham allowed two runs on three hits over four innings in the Pirates' 9-6 loss to the Rangers on Wednesday. He walked three and struck out five in the no decision.

Kingham is getting a shot to start with Chris Archer and Jameson Taillon currently on the injured list, but didn't do much to impress in this outing. Pittsburgh only trusted him to throw 78 pitches, and he allowed six baserunners in four innings. Kingham has showed potential in the past, especially with his slider, but he's more of a wait-and-see pitcher than one to add right now. His next start would come Monday at Arizona.

Elliott Baas1 year ago
Do Not Sell
Are you looking to contact Customer Support about a subscription or account related question?
Yes
No, I'm a California resident looking for the California Consumer Privacy Act form