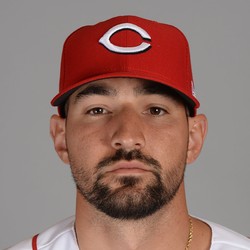 Nick Castellanos told the Cincinnati Enquirer that he doesn't want to DH for the Reds this season.

“I don’t want to DH,” Castellanos explained. “I chose to come to the Reds, first and foremost, I believe they can win. But also, I like being in National League where I get to play defense every day. A goal of mine is to become a better and better defender every year that I play – every game that I play is probably a more appropriate answer.” The Reds have a plethora of outfielders and will surely be using one of them to DH most days. Castellanos isn't the best defender, which likely would've made him a candidate to serve that role before these comments. Nick Senzel, Jesse Winker, and Shogo Akiyama are expected to help fill out Cincinnati's outfield this year. Winker will likely wind up as the designated hitter based on those options.

Nick Castellanos (illness) is expected to play Thursday in the Reds' Cactus League game against the Brewers.

Castellanos has missed the last two games due to an illness, but is expected to re-join the lineup on Thursday. He is slashing .333/.333/.500 with a double and two RBI across six plate appearances this spring. Castellanos is in no danger of missing Opening Day, and will look to build on his .321/.356/.646 slash line with Cubs in the second half of last season. He is currently 86th overall in the expert consensus rankings. With a strong spring, the 28-year old could see his ranking rise as Spring Training draws to a close.

Free-agent outfielder Nicholas Castellanos has agreed to a deal with the Cincinnati Reds, according to a report from MLB insider Jon Heyman. It is expected to be a multi-year deal.

Castellanos batted .289 with 27 home runs, 100 runs scored, 73 RBI, and two stolen bases with the Detroit Tigers and Chicago Cubs last season, but he was particularly good for the Cubs after they acquired him via trade. His market moved slowly this offseason, but he now joins a Reds squad that has made a number of moves in hopes of competing in 2020.

Texas is among the favorites to land Castellanos, who has also been tied to the White Sox, Cubs, Giants, Diamondbacks, and Marlins. Castellanos would likely move to first base if he signs with Texas given their current roster situation. Castellanos continued his mediocre production with the Tigers in 2019 before lighting it up following a trade to the Cubs. He'll be an interesting name in fantasy drafts this year depending on where he ultimately lands. Texas would be a great offensive environment.

Jon Morosi of MLB.com writes the Rangers are seen as a finalist to sign free-agent outfielder Nicholas Castellanos.

Castellanos has been linked to a variety of teams this off-season, including the Reds, Cubs, and Giants as well. The outfielder flourished following a mid-season trade to the Cubs in 2019, batting .321 with 16 homers in 51 games with the north siders.

Brendan Tuma - Too Much Tuma27 weeks ago
Who Should I Draft?
Do Not Sell
Are you looking to contact Customer Support about a subscription or account related question?
Yes
No, I'm a California resident looking for the California Consumer Privacy Act form