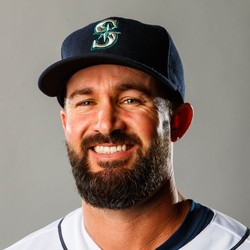 Nick Vincent did not allow a base runner in his nine-pitch eighth inning in Boston on Sunday.

This was a good bounce back appearance for Vincent as he got rocked by the Sox on Friday night, allowing three hits and two runs while only recording one out in his first appearance off the DL this month. He will look to get back in the swing of things as a dominant middle-reliever, just as he was over the month of May. Over 12 appearances on the month, he allowed only four hits and three runs while striking out 12.

Vincent appeared to be struggling with a leg injury in his groin area while departing. The 31-year-old reliever is a good guy to own in fantasy leagues with holds. His owners should keep an eye on updates with the status of his leg.

Nick Vincent struck out one batter over 1 1/3 innings of relief to earn the win in Oakland on Tuesday night. This was his third win of the season.

Vincent retired four batters on 11 pitches (10 of them strikes) to keep the game tied through the end of the ninth inning. While he does not have overpowering stuff (average fastball velocity of 89 mph), Vincent has been effective in the month of May, striking out 11 over 10 innings while only giving up two earned.

Nick Vincent gave up two runs on three hits over 2/3 innings as he gets assigned the loss against the Tigers on Thursday. He walked one and struck out one.

Vincent had been cruising through the month of May up until tonight. He hadn't allowed a run over seven innings, while also striking out a batter an inning and only walking one. His season ERA bumps up to 4.50 and WHIP up to 1.28.

Nick Vincent (3-3) was credited with the loss while allowing two runs on three hits over one inning in Seattle's 3-1 defeat to the Rangers on Tuesday. He struck out one and walked none.

Vincent has hit a wall in his last three appearances, surrendering six runs on seven hits over 2 2/3 innings, while being saddled with two losses in that stretch. The 31-year-old right-hander, who has been solid throughout the 2017 campaign, saw his ERA rise from 2.10 to 2.87 during his current funk. He still, however, ranks second in the American League with 27 holds, trailing only Taylor Rogers of the Twins. With a fine 1.12 WHIP, look for Vincent to add value down the stretch in leagues that count holds.