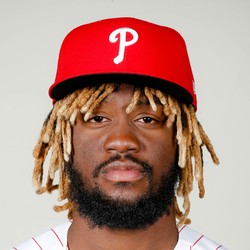 Rob Ingalsbe5 weeks ago
Odubel Herrera suspended for the rest of 2019, part of 2020

Jim Salisbury of NBC Sports Philadelphia reports Odubel Herrera has accepted a suspension from MLB for the remainder of 2019 (playoffs included).

Herrera will also miss part of the 2020 season, though we aren't sure how many games yet. Herrera was arrested for domestic violence back in late-May. The charges against him were eventually dropped but MLB still decided to hit him with the giant suspension.

Phillies outfielder Odubel Herrera, who has been on administrative leave since getting arrested for domestic violence in late May, had those charges dismissed in court on Wednesday. According to Meghan Montemurro, "The state is not able to proceed with the charges because the plaintiff, his girlfriend, doesn’t want to go forward with them."

Herrera's leave was just extended to July 5, and it seems likely at this point that the team will re-evaluate the situation over the All-Star break and decided how they want to proceed. Major League Baseball could still pursue a suspension of their own despite the charges being dismissed, but it's possible that they could consider the month that he has already missed as a suspension. Look for an update from the Phillies over the next week or so.

Herrera was arrested for domestic violence back on May 28th and is almost certainly facing a suspension by MLB, whether he is convicted of a crime or not. Herrera reportedly caused "minor injuries" to his girlfriend in this incident.

Herrera was arrested for domestic violence in an incident that involved his 20-year-old girlfriend in Atlantic City. MLB will now begin their own investigation into the matter.

Brendan Tuma - Too Much Tuma39 weeks ago