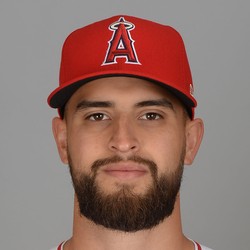 Patrick Sandoval (0-4) allowed one run on two hits and three walks while striking out three through three 1/3 innings in Friday’s 4-0 loss to the Astros. He was charged with his fourth loss of the season.

Sandoval continues to be limited, he has only pitched long enough to qualify for a win twice. He will end the season with a 5.03 ERA, 1.37 WHIP and 42 strikeouts over 39 1/3 innings this season.

Patrick Sandoval allowed three runs on two hits and two walks while striking one through three innings in Saturday's 8-4 win over the Astros. He did not factor into the decision.

Sandoval gave up three runs in the second inning and received the hook shortly afterwards. He owns a 5.25 ERA, 1.36 WHIP and 39 strikeouts across 36 innings pitched this season. His next scheduled start is Friday, home against the Astros.

Patrick Sandoval allowed one run on two hits and four walks while striking out four through four innings in Sunday's 6-4 win over the Rays, He did not factor into the decision.

It was the first time this month that Sandoval finished with at least four innings, but he's allowed one or fewer runs in three of his last four outings. He owns a 4.91 ERA, 1.36 WHIP and 38 strikeouts in 33 innings this season. His next scheduled start is Saturday, away against the Astros.

Patrick Sandoval (0-3) allowed three runs on five hits while striking out four and two walks through three 1/3 innings in Monday's 6-2 loss to the Indians. He took his third loss of the season.

Sandoval has a 34:13 K:BB across 29 innings, but sports a high 5.28 ERA. He is also on a pitch count, which limits him from going deep into the games. His next scheduled start is Sunday, home against the Rays.

Patrick Sandoval (0-2) allowed one run on one hit and one walk while striking out three through three 1/3 innings in Wednesday's 4-0 loss to the Athletics. He was saddled with his second loss of the season.

Sandoval was effective, only allowing a solo home run and a walk through 3.1 innings before being pulled after 52 pitches.The Angels will most likely limit his pitch count going forward. He owns a 4.91 ERA with a 30:11 K:BB through five starts this season. His next scheduled start is Monday, away against the Angels.