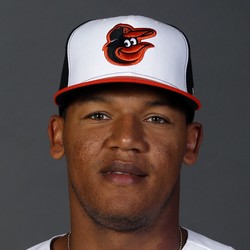 Pedro Severino went 4-for-6 with three RBI, a stolen base and two runs scored in the Orioles’ 14-2 victory over the Royals.

Severino has been splitting time at catcher with Chance Sisco but could see more time as the Sisco has been struggling. Severino is now hitting .258 with 32 runs scored, 11 home runs, 37 RBI and three stolen bases in 295 plate appearances.

Pedro Severino went 1-for-4 with a grand slam in a 7-1 victory against the Rays on Saturday.

Severino is now hitting .251 with 11 home runs, 34 RBI, 30 runs and two steals in 251 at-bats this season. The 26-year-old catcher is behind Chance Sisco on the depth chart and is not worth owning in fantasy.

Pedro Severino went 4-for-5 with a home run, four RBI, a run scored and a stolen base in Saturday's 8-7 win over the Angels.

Severino could be starting a hot streak as he has had four hits in his last two games. The veteran catcher is having a solid year with the bat hitting .279 with 10 homers, 29 RBI, 25 runs scored and two steals in 61 games. But Severino is splitting time with Chance Sisco behind the plate which hurts his fantasy value and is only worth owning in deeper formats.

Pedro Severino went 4-for-8 with two runs scored in Thursday's extra-inning win over the Angels.

Severino had a double to go along with this three singles. Thursday was the second time this season where he recorded four hits. At the moment, Severino does not warrant any fantasy consideration.

Pedro Severino went 3-for-4 with three RBI and two runs scored in Friday's 10-9 loss to the Mariners.

Severino has put up some solid stats at the plate this season hitting .289 with eight home runs and 21 RBI. The 25-year-old catcher has been sharing catching duties with Chance Sisco but has been able to find his way into the lineup as a DH as well. Severino is worth grabbing in deeper fantasy leagues.