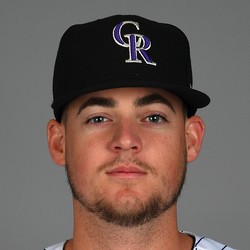 The Rockies have shut down Peter Lambert for the remainder of 2019.

The 22-year-old got off to a hot start in the bigs before struggling for the rest of the season. Lambert wound up posting a 7.25 ERA through 19 starts and will compete for a spot in Colorado's rotation for 2020 next spring.

Peter Lambert received a no-decision on Sunday in San Diego, allowing just one run on five hits over five innings.

Lambert struck out four and walked three as the Rockies went on to lose in 10 innings. The rookie now owns a 6.86 ERA on the year and cannot be trusted for fantasy purposes moving forward.

Peter Lambert was hit hard on Monday against the Dodgers, giving up six runs on eight hits over 1 2/3 innings.

The loss dropped Lambert to 2-6 on the year to go along with a 7.19 ERA. The 22-year-old should not be on your radar for his next outing versus the Padres.

Lambert walked four and failed to strike anyone out. He was tagged for a two-run homer by Marcell Ozuna in the first inning and ultimately couldn't make it through five. Lambert owns a 6.40 ERA on the season and can't be trusted for fantasy purposes moving forward.

Peter Lambert received a no-decision on Sunday versus Miami, tossing six innings of three-run ball but striking out just two.

Lambert allowed six hits and a walk as he earned a quality start. The rookie is now 2-3 this season to go along with a 6.55 ERA. He'll remain waiver wire fodder for his next start against the Cardinals.