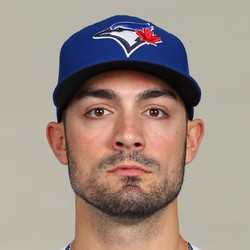 Randal Grichuk has not yet joined the Blue Jays for their summer camp in Toronto, Laura Armstrong of The Toronto Star reports.

Twelve members of the organization were held back in Florida due to a positive COVID-19 test, and while none of their names have been released, and it speculated that Grichuk could be one of them. Fantasy owners should keep an eye on updates concerning Grichuk.

John AubinJul 11, 2020
Randal Grichuk on track to start in the outfield

Grichuk is coming off a season in which he picked up a career-high 31 homers and 80 RBI. But the veteran outfielder only hit .232 with a .280 on-base percentage. Grichuk is only worth drafting in deeper leagues for fantasy owners needing power.

Randal Grichuk went 1-for-4 with a triple while scoring a run and driving in a run as the Blue Jays beat the Rays by a 4-1 score on Saturday.

Grichuk is hitting just .233 on the season with a .282 on-base percentage. But the veteran outfielder has put up some nice power numbers with 30 home runs and 80 RBI. Grichuk is worth owning in deeper leagues for owners needing some slugging.

Randal Grichuk went 1-for-5 with a grand slam and a walk Wednesday against the Orioles.

Grichuk is red-hot at the plate for the Blue Jays as he has a 10-game hitting streak and has five home runs over his last five games. Fantasy owners in playoffs may want to grab the veteran hitter and take advantage of his hot spell.

Randal Grichuk went 1-for-5 with a solo home run in a 6-5 victory against the Yankees on Friday.

Grichuk is only hitting ,232 on the season but has put up some nice counting stats. The veteran slugger has 26 home runs, 67 RBI, 66 runs and two steals in 534 at-bats this season. Grichuk is worth owning in deeper fantasy leagues.

John Aubin43 weeks ago
Who Should I Draft?
Do Not Sell
Are you looking to contact Customer Support about a subscription or account related question?
Yes
No, I'm a California resident looking for the California Consumer Privacy Act form