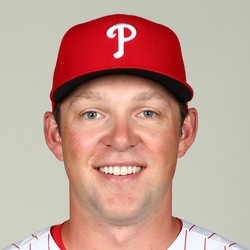 Phillies first baseman Rhys Hoskins went 1-for-3 with a two-run home run and a walk in Tuesday's win over the Braves. The homer was his 29th of the season.

Hoskins has now hit in eight straight games and seems to be getting hot at the right time for fantasy owners who are trying to win their championships this week.

Phillies first baseman Rhys Hoskins went 2-for-3 with a home run, a walk, and two runs scored in Sunday's loss to the Red Sox. The homer was his 28th of the season.

Hoskins has now hit in seven straight games, with multiple hits in two of those contests as he continues to stay hot after slumping in August.

Phillies first baseman Rhys Hoskins went 1-for-4 with a double, a walk, and a run scored in Thursday's win over the Braves.

Hoskins now has hits in five straight games as he continues to work his way out of a slump. His batting average is .236 on the year, but he does have 108 walks to boost his value in OBP leagues.

Phillies first baseman Rhys Hoskins went 0-for-4 with two strikeouts in Saturday's win over the Mets.

Since hitting two home runs in a game against the Reds six games ago, Hoskins has gone just 1-for-19 over his next five games. His average is now down to .234 on the year, though he does have a .376 OBP thanks to 107 walks.

Phillies first baseman Rhys Hoskins went 2-for-4 with two home runs and three RBI in Monday's win over the Reds. The homer was were his 26th and 27th of the season.

Hoskins is showing signs of life at the plate after slumping in August, and he has already matched his home run total for August through two days in September. He has multiple hits in three of his last five games and is now batting .241 on the season.