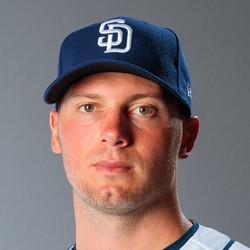 Robbie Erlin gave up a run on three hits over two innings of work in a spot start on Sunday in Toronto.

Chris Paddack was scratched with a minor neck issue so the Padres had a bullpen day. San Diego went on to lose 10-1.

Robbie Erlin and the Padres have settled for 1.45M thus avoiding the arbitration process.

2018 was Erlin's first healthy season in some time. He was used out of the pen during the first four months before becoming a full time starter during August and September. He put up mixed results allowing 28 ER in 48.1 IP and going 3-4 over those last two months. He'll likely slot in as the teams 4th or 5th starter to begin 2019 and with added offensive fire power could be a useful streamer in good matchups.

Robbie Erlin allowed two runs (one earned) in five innings receiving a no-decision in the Padres’ 5-4 loss against the Giants on Tuesday. He gave up four hits while striking out four. He lowered his season ERA to 4.21.

Erlin will most likely be moved back into the bullpen in 2019. He was extremely successful in the bullpen this season and the Padres should want to put him in the best position to succeed. On a positive note he ended the season strong with three consecutive outings allowing three or fewer runs. Erlin will not be drafted in redraft mixed leagues in 2019.

Robbie Erlin allowed three runs in five innings logging the win against the Giants on Wednesday. He gave up five hits and two walks while striking out three. Erlin's ERA now sits at 4.33 for the season.

Erlin's numbers looked promising before being turned into a starter. He owns a 2.10 ERA to go along with his 0.80 WHIP as a reliver. He clearly cannot go deep into games and is better suited as a reliver. Erlin will receive one more start this season. It will be on the road against these same Giants.

Robbie Erlin allowed two runs (one earned) in 5 1/3 innings against the Rangers on Friday. He gave up six hits and struck out six. He lowered his season ERA to 4.27.

Erlin pitched well against a good hitting team in the Rangers. Erlin has struggled as a starter this season and should return to the bullpen in 2019. He will take on the Giants at home in his next start.