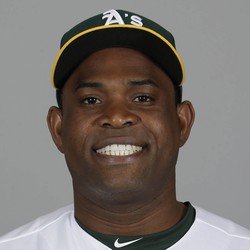 Santiago Casilla has a shoulder strain and is likely headed for the disabled list, Jane Lee of MLB.com reports.

Casilla has been struggling in his set up role in the A's bullpen with a 5.40 ERA over the last 14 games. There is no reason to hold onto the 37-year-old reliever if he does go on the disabled list.

Santiago Casilla was charged with three runs on three hits and two walks in two innings relieving an injured Andrew Triggs in the A's 10-5 win over the Blue Jays.

Coming into the game in the third inning to relieve injured A's starter Andrew Triggs and actually pitched well for the first 1 2/3 innings as the A's built a 7-1 lead thanks to a big top half of the fifth. Unfortunately, he started the bottom half of the frame with a base hit and a walk before eventually serving up the one bad mistake of his outing, an RBI double to Justin Smoak. He'd come out of the game at this point, replaced by Yusmeiro Petit but alas, two more runs would be tacked onto his account. He has a 3.60 ERA, a nice 1.05 WHIP and 14 punch outs in 20 innings of work in 2018

Santiago Casilla surrendered two runs on a hit while walking one and striking out one in a non-save appearance.

Casilla came in with the score 6-3 and labored through the bottom of the eighth giving up a pair of runs in the process. Serving as an interim closer with Blake Treinen day-to-day, Casilla did not help his cause to garner confidence with this outing as he will more than likely relegate back to a set up role when the incumbent returns.

Santiago Casilla pitched a perfect inning in relief to secure his first save of the season.

Casilla barely made the club after a rough season last year and an uninspiring Spring but came in and secured the save when Blake Treinen Treinen took a 105 mph line drive off the shin in the eighth inning. Casilla certainly has experience in the ninth inning having put in back-to-back seasons with 30+ saves for the Giants before joining the A's across the bay. Although manager Bob Melvin expects Treinen to be ok, Casilla may be in line for a save or two if the bruise lingers.

Santiago Casilla surrendered three runs on back -to-back home runs in the bottom of the ninth of the loss to the Blue Jays.

This outing pretty much sums up Casilla's miserable season as the A's closer as it was his sixth blown save of the year (among league leaders) and his fifth loss. Entering the game in the ninth nursing a 2-0 lead, Casilla wasted no time putting Josh Donaldson aboard with a free pass before serving up a three pitch bomb to Justin Smoak to tie the game up. The very next pitch got deposited in the right field bleachers by Kendrys Morales for the walk-off. The A's readily shipped back-end studs Ryan Madson and Sean Doolittle earlier in the month so rolling with the combustible, unreliable Casilla is to be expected but, for owners also turning to him for saves (undoubtedly only in the deepest formats around), it may not last much longer. Dragging a 4.66 ERA and a bloated 1.45 WHIP, Casilla is now 2-5 with 16 saves and 34 strikeouts in 36 2/3 innings.