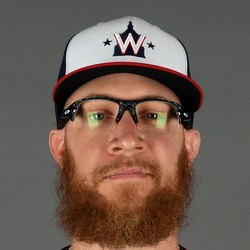 The Nationals have exercised Sean Doolittle's $6.5 million option for 2020.

Even though Doolittle again battled injury and had the highest ERA of his career last year, the option was a no-brainer for the Nationals. Doolittle should remain in the closer's role unless the Nationals add a significant piece to their bullpen, which seems unlikely. Despite the injuries, Doolittle has tallied at least 24 saves in each of the past three seasons and makes a fine second-tier closer.

The Nationals placed Sean Doolittle on the 10-day injured list with knee tendinitis.

Doolittle blew another save last night, giving up four runs on three homers. Perhaps this knee issue explains why he has been struggling lately. Daniel Hudson should see some save chances in his absence. Add him everywhere.

Nationals closer Sean Doolittle allowed one walk and struck out one over one inning to earn his 28th save of the season in Friday's win over the Brewers.

Doolittle has hit some rough patches this season as evidenced by his 3.66 ERA, but he remains one of the most valuable closers in fantasy.

Nationals closer Sean Doolittle earned his 27th save of the season in Monday's win over the Reds, but he allowed two earned runs on three hits and a walk in the process.

Doolittle has now allowed six earned runs over his last three appearances to see his ERA jump to 3.73 on the season. He was pitching for the second day in a row and third time in four days, so it's possible he just didn't have it on Monday. He is not in any danger of losing the closer's job in Washington at this point, but that has as much to do with the lackluster Nationals bullpen as it does their confidence in Doolittle.

Nationals closer Sean Doolittle struck out one over a perfect ninth inning to convert his 26th save of the season in Sunday's win over the Mets.

Doolittle had allowed four earned runs in his previous appearance, so Sunday was a nice bounce back performance by the veteran closer.