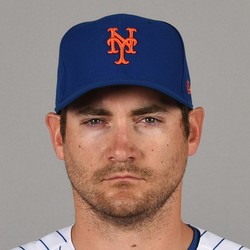 Seth Lugo, who has been dealing with a fractured pinky toe recently, participated in fielding drills Thursday at Mets camp and is now in line to throw BP on Sunday.

This is certainly positive news, as Lugo is recovering just as expected. The 30-year-old righty has been brilliant out of the Mets' bullpen the last two seasons and will be counted upon as an important piece of the puzzle again in 2020.

Nate MillerFeb 27, 2020
Seth Lugo (toe) could return over the weekend

Seth Lugo (toe) could return to the mound over the weekend.

Lugo suffered a toe injury on Monday and has been limited all week. However, it isn't a long-term concern. Expect Lugo to start throwing some bullpens in the coming days.

Mets reliever Seth Lugo will miss the start of the Grapefruit League season due to a fractured left pinkie toe, manager Luis Rojas said Tuesday. Lugo injured his toe banging into an object in his Port St. Lucie home on Monday night. “No major concern,” Rojas said. “It’s going to take like three days probably off throwing, and obviously we’ll ramp him up from there.”

Lugo is coming off an impressive 2019 season where he posted a 2.70 ERA with 104 strikeouts in 80 innings. He is expected to be a prominent part of the Mets’ bullpen this season, pitching anywhere from the middle innings to the ninth -- often for more than three outs at a time.

Mets GM Brodie Van Wagenen says that Seth Lugo is a candidate for the Mets’ rotation in 2020.

As is Robert Gsellman. Both pitchers began the 2019 season as multi-inning relievers. Lugo eventually served as the team’s closer for a bit as well. If New York can get him stretched out in spring training Lugo could flirt with streamer status entering next year.

Seth Lugo allowed five runs on five hits and one walk, lasting 1/3 of an inning against the Braves on Wednesday. He suffered his third loss of the season.

Mets manager Mickey Callaway had indicated Lugo would see some save opportunities last week, but Lugo entered the game in the seventh inning when he promptly gave up five runs. This was the first time he had given up multiple runs in an outing since June 29th.