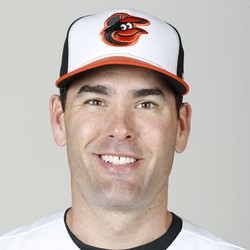 Seth Smith came up big for the Orioles Tuesday, as he went 2-3 with two runs scored and three RBIs. One of those hits was a two-run double, and the Orioles would win 7-2.

Smith has lost his spot at the top of the order and is not playing regularly, so he's not rosterable at the moment. He is now hitting .269 with 11 homers, 26 RBIs, and 40 runs scored over 242 at-bats.

Seth Smith went 1-3 at the dish Monday, but that lone hit was a solo shot in the seventh inning.

Smith has played fairly well when receiving playing time, but that playing time is quickly dwindling. Trey Mancini has established himself as an everyday player, and Adam Jones has recently taken over the leadoff spot. This combination has led to a decrease in playing time for Smith, and when he does play, he likely will not be hitting higher than sixth. He is now hitting .260 with 10 homers, 21 RBIs, and 35 runs scored in 223 at-bats.

Seth Smith had quality at-bats this weekend. He went 2-5 Friday with a solo homer, and then went 3-4 Sunday, driving in a run and scoring once.

Smith has done well at the top of the order when given the chance, but he remains in a timeshare with Joey Rickard. Neither of these guys are fantasy options at the moment. Smith is hitting .259 with nine homers, 20 RBIs, and 34 runs scored over 216 at-bats.

Seth Smith went 3-4 Wednesday (all singles) and scored two runs in a 10-4 win over the Yankees.

Over 118 at bats, Smith is quietly producing with a .271 average, 4 homers, 10 RBIs, and 20 runs scored. If Smith can maintain his position at the top of the Orioles lineup, he will be a source of runs. Currently, he is not worth rostering until he can stick in the lead off spot, and Adam Jones and Manny Machado get hot to drive him in.

Seth Smith went 2-4 Thursday, which included a solo homer, his fourth on the year. He also hit an RBI single.

Even though he has been playing in a platoon role, Smith has thrived at the top of the Orioles lineup when given the opportunity. His average is .310, and he has 10 RBIs and 16 runs scored over 84 at-bats. Smith still is not relevant for fantasy purposes, however.