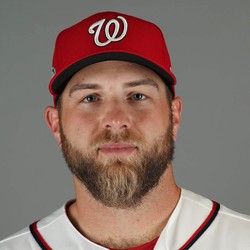 Spencer Kieboom went 1-for-3 with a single, a walk and an RBI in the Nationals' loss to the Mets.

Kieboom has improved a noticeable amount in September, hitting his first two career home runs while batting .292/.393/.542 in 24 at-bats.

Spencer Kieboom went 2-for-4 with a solo home run in game one of the Nationals' doubleheader on Tuesday.

A special day for Kieboom, who hit his first major league homer in the first game of the Nationals' doubleheader. Kieboom has had his moments, but for the most part has struggled at baseball's highest level, hitting .210/.288/.286 in 105 at-bats this season.

Spencer Kieboom doubled in Thursday's loss to the Phillies. He was 1-for-2 at the plate with the double.

Kieboom's .202 average isn't all that impressive but the Nationals haven't given him many opportunities to produce. He's thrown in as a pinch-hitter here and there while Matt Wieters continues to get the bulk of the starts.

Spencer Kieboom went 0-for-3 in the Nationals' loss to the Cardinals.

Kieboom hasn't collected a hit since August first and doesn't have any fantasy relevance.

Spencer Kieboom went 0-for-2 at the plate with two walks and two runs scored in the first game of Tuesday's doubleheader.

Kieboom did a good job of drawing walks in this one that helped lead to two runs scored. Wieters got the start in the second game so we didn't get a chance to see him back again for the day. Kieboom will likely get another start tonight or Thursday afternoon.

Kari Thomas2 years ago
Who Should I Draft?
Do Not Sell
Are you looking to contact Customer Support about a subscription or account related question?
Yes
No, I'm a California resident looking for the California Consumer Privacy Act form