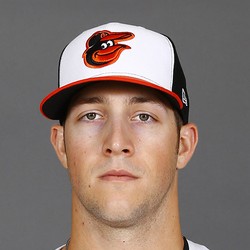 Stevie Wilkerson went 2-for-3 on Sunday against the Phillies, hitting two singles and driving in a run in the 3-2 victory.

Wilkerson is competing for at-bats in the outfield, but is likely to be nothing more than a fifth outfielder. He needs to cut down on his abysmal 30% strikeout rate to be considered an everyday regular.

Stevie Wilkerson went 2-for-4 with a solo homer and an RBI single as the Orioles defeated the Blue Jays 8-1 on Saturday.

Wilkerson has been seeing action in the outfield and second base but has not been able to land a full-time role with his bat. On the season the 27-year-old is hitting just .218 with a .265 on-base percentage, seven home runs, and 21 RBI. Wilkerson can be left on the waiver wire.

Stevie Wilkerson went 1-for-5 with a three-run home run and two strikeouts in Tuesday's 11-4 loss to the Yankees.

Wilkerson has been seeing some playing time with the Orioles and is hitting .264 with five home runs and 13 RBI in 25 games. Some solid numbers but there will be some regression and fantasy owners can avoid Wilkerson.

Stevie Wilkerson went 2-for-4 with a home run and two RBI in a 5-1 victory against the Indians on Friday.

Wilkerson has been a nice surprise since the team brought him up from the minors in April. The 27-year-old is hitting .292 with a .311 on-base percentage with four homers and 10 RBI in 74 plate appearances. Wilkerson will show some regression but for now, he is worth owning in deeper fantasy formats and AL-only leagues while he is hot.

Stephen Wilkerson went 2-for-3 with a run and an RBI in the Orioles victory over the Angels Sunday.

Wilkerson got the rare start at second base in favor of Schoop, who would come into the game later. Wilkerson had a decent day at the plate, with a double and a single, as well as an RBI and scoring a run. It does say something that the Orioles wanted to sit the slumping Schoop, but that doesn't mean Wilkerson is supplanting him anytime soon.