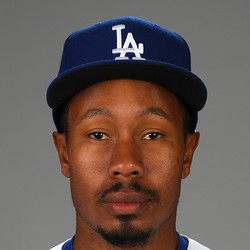 The Yankees acquired Gore from the Kansas City Royals on Wednesday for cash considerations.

Gore could be a factor at some point in the second half for the Yankees, who entered Wednesday ranked 21st in the majors in stolen bases (35). But unless you have a deep bench and/or a significant need for stolen bases, you'd be better off leaving him on the waiver wire. Gore has just 58 plate appearances on the season, with most of his 13 steals coming in a pinch-running capacity.

Kansas City Royals outfielder Terrance Gore stole a base and scored a run in a 5-2 loss to the Nationals on Sunday.

Gore entered the game as a pinch-runner. Despite only logging 51 at-bats, Gore has stolen 13 bases. He could lead the league in steals if he ever earned a starting role.

Kansas City Royals outfielder Terrance Gore stole a base in a 5-3 loss to the Twins on Saturday.

Gore made an appearance as a pinch-runner and promptly stole his 12th base of the season. He has stolen four bases over his past three games. Gore doesn't play every day but he's on the radar in daily fantasy leagues when his name is in the starting lineup.

Matthew Terelle31 weeks ago
Terrance Gore steals a base

Kansas City Royals outfielder Terrance Gore went 0-for-3 with a walk and a steal in a 3-2 loss to the Tigers on Wednesday.

Gore only plays sparingly, having seen just 40 at-bats this season. That being said, he has an impressive eight steals in that time. If he ever found his way to a full-time job, he would be fantasy relevant for the steals alone.

Matthew Terelle33 weeks ago
Terrance Gore steals a base on Sunday

Kansas City Royals outfielder Terrance Gore stole a base in his team's 5-2 loss to the Tigers on Sunday.

Gore pinch-ran for Cam Gallagher and promptly stole second base. He didn't log a plate appearance as he was then replaced in the field by Martin Maldonado. Gore is hitting .400 with six runs, one RBI, and five steals in 20 at-bats this season.