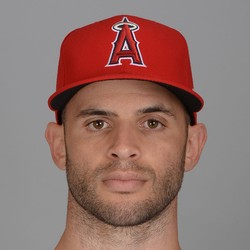 Tommy La Stella went 0-for-4 in Friday’s loss to the Astros.

La Stella took the field for the first time since July after recovering from a fractured right leg. He went hitless in Friday’s loss and will most likely be the designated hitter for the rest of the series.

Tommy La Stella (leg) could play in a few games in the final series of the season against the Astros as the designated hitter.

La Stella will run the bases again Wednesday prior this weekend's four-game series against Houston. He has not played in a game since July 2nd, so he will probably be pretty rusty at the plate if he does indeed get a few starts as the DH.

Tommy La Stella (leg) ran the bases Saturday and is still hoping to return to the field in the final week of the season.

La Stella has been out since July 2nd but remains hopeful that he'll return to the lineup before the season is over. With just over a week remaining in the campaign, the Angels will have to decide shortly on La Stella's status for the season.

Tommy La Stella (lower leg) has taken part in agility drills and running this week but remains without a clear timeline to resume playing in games.

La Stella continues to hold out hope for a return from the 60-day injured list, but he still has multiple hurdles to clear in his rehab program and is running out of time to do so. La Stella has been sidelined since early July with a fractured right tibia.

Tommy La Stella (leg) is experiencing discomfort while performing certain movements and may not be ready to return this weekend as hoped.

La Stella was on track to return for the Angels' weekend series in Chicago after ramping up his activity to include fielding drills and batting practice, but continued discomfort in his right leg may put those those plans on hold. He has been out of action since fouling a ball off his shin and fracturing his tibia July 2nd.