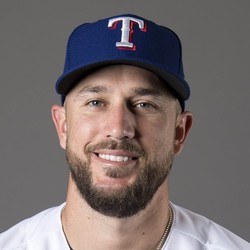 Trevor Plouffe went 1-for-3, but that one hit counted. It was a 3-run blast that broke the 4-4 tie between the Phillies and Dodgers in 16 innings.

Once upon a time, Trevor Plouffe was a decent fantasy option. Now he is not. He barely made this Phillies' squad and won't see any significant playing time.

Trevor Plouffe signed a minor-league contract with the Philadelphia Phillies on Monday, Gerry Fraley of the Dallas Morning News reports. He had asked for and received his release from the Texas Rangers two weeks ago.

Plouffe has no immediate fantasy impact but merely provides organizational depth at third and first base for the Phillies. Even if he does get called up to the big league squad, it will likely be as a part-time player who mostly sees at-bats against left-handers.

Playing in his first game as a Tampa Bay Ray against the Reds, Plouffe went 1-for-4. He would have liked for it to have gone differently as he struck out, grounded into a double play and left five men on base. For the season he is hitting .215/.276/.631 with seven homers, 14 RBI and a stolen base.

The Rays currently have a log jam of infielders. Many of those players have the ability to play multiple positions. This will only get worse when Brad Miller returns to the lineup. Plouffe, who is in the midst of a very bad season offers limited value because of the playing time and performance question marks surrounding him.

Trevor Plouffe is batting seventh and DHing for the Rays Monday against the Reds.

Plouffe had no value on the Athletics, and will continue to have no value in Tampa Bay. He will essentially take Rickie Weeks Jr.'s role on Tampa Bay's roster.

Plouffe lost his starting job to rookie and top A's prospect Matt Chapman. Plouffe struggled to the tune of a .634 OPS on the season.