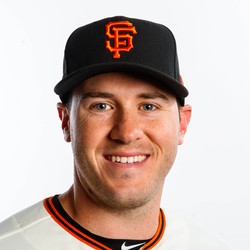 Ty Blach allowed six earned runs on nine hits and one walk while striking out three across 2 1/3 innings to take the loss Tuesday against the Dodgers.

Blach did not look good at all on Tuesday and is now 1-2 with a 10.95 ERA and 2.15 WHIP. The 28-year-old lefty will face the Tigers next and fantasy owners should be leaving Blach on the waiver wire.

Ty Blach (1-2) threw five innings and allowed two runs on two hits and four walks and earned the win in a 4-2 decision over the Rays in the first game of a doubleheader.

Blach had a nice bounce back from his last start when he gave up seven runs and was sent to the minors. Overall the 28-year-old has a 10.95 ERA, 2.15 WHIP, and 17 strikeouts in 24 2/3 innings this season and can be left on the waiver wire.

Ty Blach took the loss after surrendering seven runs on nine hits and two walks while striking out two over four innings Friday against the Rays. He was optioned to Triple-A Norfolk after the game, Nathan Ruiz of The Baltimore Sun reports.

Ty Blach allowed five runs on five hits with three walks and six strikeouts across 5 1/3 innings during a no-decision against the Red Sox on Sunday.

Ty Blach pitched the eighth and ninth innings Wednesday, allowing no runs and one hit, while striking out four and walking two.

Bruce Bochy has used Blach in many different roles, but he has found success out of the bullpen. He is 3-1 with a 3.00 ERA as a reliever compared to 3-6 with a 5.15 ERA. He is not a fantasy option at this moment as the majority of the time he is the team's long reliever. If he sneaks into a spot where he is recording holds then he becomes an option.