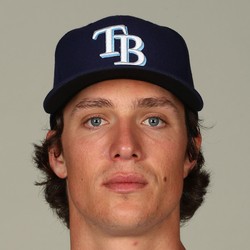 Tyler Glasnow tossed three and 1/3 simulated innings Tuesday, throwing 49 pitches and striking out four. It was his first day back at camp, as it was recently confirmed that he tested positive for COVID-19.

Glasnow went from just reporting to getting on the mound in a hurry, which is great news. Based on where he's at, he should be able to progress to make a start within the first week of games.

Tyler Glasnow was seen at camp for the first time on Tuesday.

Glasnow's status for Opening Day is uncertain, given that it's just over a week away and he hasn't been with the team. The Rays figured to be somewhat cautious with Glasnow anyway, as he only pitched 60 innings last year. Based on his above-average ratios and elite strikeout rate, he could finish the year as a top 20 starting pitcher despite the delayed start.

Tyler Glasnow has yet to make an on-field appearance at Rays summer camp.

The team isn't giving a reason for his absence. Fellow starters Yonny Chirinos and Brendan McKay are away from the team as well. Glasnow was absolutely electric when healthy in 2019, posting a 1.78 ERA in just over 60 innings pitched.

Tyler Glasnow has not worked out during Rays' summer camp at Tropicana Field.

Glasnow has been a non participant at summer camp for the last four days. He is projected to be third in the Rays' rotation and reportedly could “pitch five or six innings right now." The 26-year-old was dominant in 12 starts last season, owning a 1.78 ERA, 0.89 WHIP and a 76:14 K:BB across 60 2/3 innings.

Tyler Glasnow won’t be limited in terms of workload for the shortened 60-game season.

“Glasnow said last week that he can “pitch five or six innings right now,” which is unrealistic, but it just shows how close he is to game action.” Glasnow has declared himself “ready to go” and won’t be limited in terms of workload. “Going into a typical 162-game season, we were already mapping out in preparation for some of those year-over-year workload concerns,” said Rays’ Pitching Coach Kyle Snyder. “But as of right now, I don’t think there'll be any limitations as it relates to guys and their innings totals.” Glasnow underwent a median nerve decompression procedure on his right wrist in November and miss the majority of 2019 due to a forearm strain. The 26-year-old was dominant in 12 starts last season, owning a 1.78 ERA, 0.89 WHIP and a 76:14 K:BB across 60 2/3 innings.

Brad Camara2 weeks ago
Who Should I Draft?
Do Not Sell
Are you looking to contact Customer Support about a subscription or account related question?
Yes
No, I'm a California resident looking for the California Consumer Privacy Act form