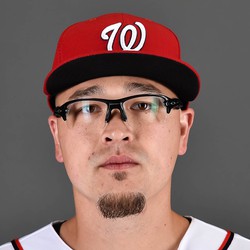 Worley had actually been pretty solid over his last few outings, but the sky fell hard in this one. He's not even a streaming option in NL-only leagues at this point.

Worley didn't walk anyone and struck out three. Yes, Vance Worley. Do not adjust your monitors/phone screens. Despite this strong outing, Worley is a streamer in fantasy if we're being extremely generous.

Vance Worley pitched seven innings on Sunday, allowing just two runs on five hits. He did not factor in the decision as the Orioles went on to beat the Indians 5-3.

Worley turned in an excellent start, keeping a dangerous Indians offense at bay all afternoon. He will carry a 3.09 ERA and 40 strikeouts into his next start which comes against the Blue Jays.

Vance Worley pitched two scoreless innings in his first start of the spring. He allowed just one baserunner and struck out one.

Worley will spend his first season in Baltimore after pitching for the Pirates last season. He appeared in 23 games in 2015, making eight starts. It remains to be seen if he breaks camp in the starting rotation or as a middle reliever. Either way, he should find things tough pitching in a hitter-friendly stadium this season.

Matthew Terelle4 years ago
Vance Worley has moved to the bullpen

The Pittsburgh Pirates have shifted Vance Worley from a starter to the bullpen because of the return of Charlie Morton. Worley needs to be let go from any fantasy team he is on.

Vance Worley was a decent fantasy pitcher this season, but he was a much better fantasy option in 2014. I would get rid of Worley because you can find a better pitcher to take over in his starting position.