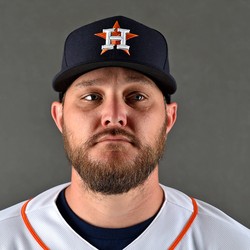 Wade Miley and the Reds have agreed to a two-year, $15 million deal.

Miley had a mediocre 2019 with the Astros, pitching to a 3.98 ERA and 1.34 WHIP, with much of the damage coming in the second half when he pitched to 5.07 ERA. A move to the National League can only help, but Miley's lack of strikeout upside leaves him as an option only in NL-only or very deep mixed leagues.

Wade Miley allowed three runs on five hits and two walks while striking out two through four innings in Thursday's 4-3 loss to the Angels. He did not factor into the decision.

Wade Miley (14-6) allowed four runs on four hits and one walk while striking out none in Saturday's 8-4 loss to the Angels. He was charged with his sixth loss of the season.

Miley has been dreadful in September, posting a 22.09 ERA and 4:5 K:BB through only 7 1/3 innings over four starts. Miley's ERA is now up to 3.71 on the season. His next scheduled start is Thursday, away against the Angels.

Wade Miley (14-5) allowed two earned runs on seven hits and two walks while striking out four through six innings in Sunday's 12-3 win over the Royals. He picked up his 14th win of the season.

Miley had a brutal start to the month of September as he gave up 12 earned runs in just 1/3 innings pitched. It was good to see him get back on track. Prior to those two starts, he sported a 2.54 ERA through July and August while posting a 54:23 K:BB across 60 1/3 innings. His next scheduled start will be Saturday, home against the Angels.

Wade Miley (13-5) allowed seven runs and one walk while striking out none through a 1/3 of an inning in Tuesday's 21-7 loss to the Athletics. He took his fifth loss of the season.

Miley has now allowed 12 runs while retiring one batter in his last two starts. His ERA has jumped from 3.06 to 3.74 during that stretch. Despite the two hiccups, Miley is still having a solid season. Miley owns a 3.74 ERA and 1.30 WHIP with 134 strikeouts in 156 1/3 innings this season. His next scheduled start is Sunday, away against the Royals.