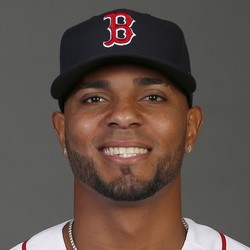 Xander Bogaerts went 1-for-1 with a run scored and a walk in his Grapefruit League game against the Rays on Wednesday.

Bogaerts had been dealing with a sore ankle early in camp and got a late start to spring action. The 27-year-old slugger had a career year in 2019 with 33 home runs and 117 RBI and should be one of the first shortstops drafted in fantasy drafts.

Xander Bogaerts (ankle) will start at shortstop and bat third Thursday in the Red Sox's Grapefruit League game against the Astros, Chris Cotillo of The Springfield Republican reports.

This is good news for fantasy owners as Bogaerts was originally slated to be the DH on Thursday. It looks like it if everything goes well the 27-year-old shortstop should be able to play on Opening Day.

Bogaerts (ankle) is at DH for the Red Sox in Wednesday's Grapefruit League game against the Tigers. It will be the first live action of the spring for Bogaerts, who was dealing with some ankle soreness in the early part of camp.

Manager Ron Roenicke said Sunday that Xander Bogaerts (ankle) is "still a ways away" from playing in games, Alex Speier of The Boston Globe reports.

The good news is that Roenicke reiterated that he still believes his shortstop has enough time to be ready for Opening Day. Fantasy owners should keep an eye on updates concering the veteran shortstop.

Xander Bogaerts is dealing with a sore ankle and will take it easy for the next few days.

Brendan Tuma - Too Much Tuma21 weeks ago
Who Should I Draft?
Do Not Sell
Are you looking to contact Customer Support about a subscription or account related question?
Yes
No, I'm a California resident looking for the California Consumer Privacy Act form