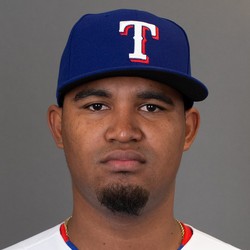 Yohander Mendez (2-1) pitched well in the win against the Padres on Friday. He went five innings, allowing just three hits and three walks with no earned runs and five strikeouts.

Mendez did not get the start but came in relief of Connor Sadzeck to begin the second and got the Rangers into the seventh. Mendez has been pitching well of late and could be worth an add in deep AL-only formats for owners desperate for pitching.

Yohander Mendez held the Twins scoreless over six innings Sunday to collect the win. He allowed three hits and a walk with two strikeouts.

It was Mendez's second start of the season for the Rangers, and he fared much better than in his initial start against the Rockies. He posted an ugly ERA and WHIP in Triple-A this season (5.246 and 1.526), making him hard to trust on a struggling Rangers team.

Yohander Mendez (0-1) allowed six runs on seven hits and two walks with one strikeout over just three innings in a loss Friday to the Rockies.

Mendez was called up to make a spot start on Friday. With a 5.26 ERA over 10 starts in Triple-A, the result against the Rockies was not too surprising. Mendez should be avoided in all fantasy leagues.