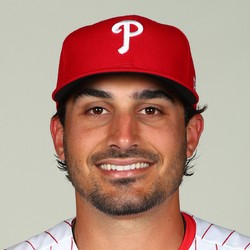 Phillies starter Zach Eflin allowed three earned runs on four hits and three walks while striking out one over 1 2/3 innings in Monday's matchup against the Atlanta Braves.

Eflin had an up-and-down 2019 with some early success that quickly faded. He is in line for a spot in the Philadelphia rotation once again in 2020, but he could quickly lose that spot if he stumbles out of the gate in April.

Phillies starter Zach Eflin allowed three earned runs on six hits and two walks while striking out six in Saturday's win over the Miami Marlins. The win brought him to 10-13 on the year.

Eflin finished what has been an up-and-down season strong on Saturday and ends the year with a 4.13 ERA and 129 strikeouts over 163 1/3 innings.

Eflin had been pitching better of late for the Phillies but stumbled on Monday, allowing three home runs. He'll now take a 4.16 ERA into his final start of the season against the Marlins on Saturday.

Phillies starter Zach Eflin allowed one unearned run on five hits and two walks while striking out four over seven innings in Wednesday's win over the Braves.

Eflin hit a rough patch earlier in the year and was demoted to the bullpen for a time, but he is finishing the season strong. After Wednesday's outing, he had his ERA back down to 4.00 on the year. He will look to continue this strong run when he takes on the Nationals in Washington in his next start.

Phillies starter Zach Eflin allowed three unearned runs on three hits and three walks while striking out five over 3 2/3 innings in Wednesday's loss to the Braves.

Eflin has been pitching better of late but remains a high-risk, low-reward option, especially in head-to-head leagues that are currently in the playoffs. He will take a 4.20 ERA into his next start against the Braves in Atlanta.

Mike Maher - The Birds Blitz42 weeks ago
Who Should I Draft?
Do Not Sell
Are you looking to contact Customer Support about a subscription or account related question?
Yes
No, I'm a California resident looking for the California Consumer Privacy Act form