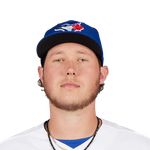 Pearson is oozing with talent, but he just can't seem to stay healthy. Whether it was elbow soreness last year or the groin strain that is now going to keep him out of action for a bit, something seem to crop up to delay his success in the majors. He wound up pitching just 18 innings overall last year, but the stuff is there, without question. His fastball reaches triple digits, his slider is dominant, and his curveball and changeup are far above average. There's always a bit more uncertainty with young power pitchers, particularly when they've had elbow injuries like Pearson has. And, after trading for Steven Matz, the Blue Jays have plenty of rotation depth and shouldn't feel pressured into rushing Pearson back from injury. In keeper and dynasty formats, he's still a buy, but in redraft leagues, he's probably not worth a pick at this point.