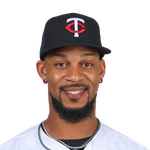 Buxton has immense talent and upside, and it feel like he could be a fantasy superstar if he stays healthy. Limited to just 39 games last year, he hit 13 home runs, greatly increasing his barrel rate (13.5%), average exit velocity (91.2 MPH) and hard hit rate (47.9%). Although he only stole two base, his sprint speed ranked in the 99th percentile. The two things holding Buxton back are his health concerns - he has played more than 92 games just once in his career, and his .238 career batting average, which won't improve until he stops swinging so much, particularly at pitches outside of the zone. But he's still just 27 years old, and has the power and speed to deliver a 30-30 season in a perfect world. Just bake in some missed time into the draft capital you're willing to spend.