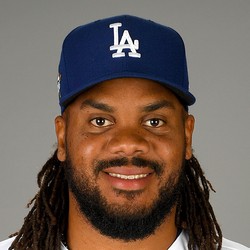 He's not the dominant force of yesteryear, but he's still a safe saves source in the shortened season.

It feels like we've seen the last of Jansen as an elite closer, as continued velocity declines and struggles with control led to his worst season as a professional. His overall numbers from 2019, other than his bloated ERA, remain fine, but this is not the Jansen that was once the top reliever taken in fantasy circles. It seems clear that Dave Roberts lost a little faith in Jansen last year and with a World Series or bust mentality, don't expect the leash to be overly long. Still, beggars can't be choosers with closer, and Jansen's contract and lengthy pedigree still keep him as a borderline top-10 reliever.

Dan Harris - FantasyPros6 weeks ago
Who Should I Draft?
Do Not Sell
Are you looking to contact Customer Support about a subscription or account related question?
Yes
No, I'm a California resident looking for the California Consumer Privacy Act form