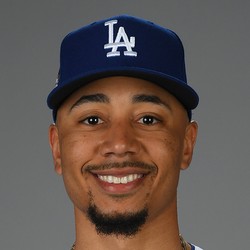 After weeks of rumors, Betts was finally traded to the Dodgers, but the move shouldn't impact his value much. His plate appearances and home runs, because of the less hitter-friendly parks in his new division, may downgrade his numbers ever so slightly. But Betts has essentially averaged a .305-120-30-95-25 line over his past four seasons. Even with a minor drop, he'll still earn his top-five draft position.

Mookie's batting average dipped 50 points from the year prior and he stole 14 fewer bases despite an extra 15 games played. With that said, his 2018 performance shows he has the upside to finish as the #1 fantasy player. As it is, the choice at #4 and #5 is between he and his teammate, Cody Bellinger.

Betts looks like a very safe, conservative 25/25 2020 OF in LAD. Leaving Fenway Park won't be a huge hit to the HR totals, if at all. Betts could be statistically better than Story/Lindor and Turner but it's a close call. Take the SS' ahead of the OF and go with the SB potential of Turner before Betts.