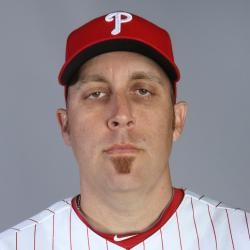 The Milwaukee Brewers concluded the season sweep of the Phillies by annihilating Aaron Harang on Sunday. Lasting just 4.2 innings, Harang allowed 6 runs, 7 hits and a walk. Harang has now seen his ERA for the month of August balloon to 10.45.

After such a promising start to the season, Harang has become a useless fantasy commodity. Since June 4th, Harang has allowed less then 4 runs just once since June 1st and hasn't improved much by any statistical measure. Continue to avoid at all costs.