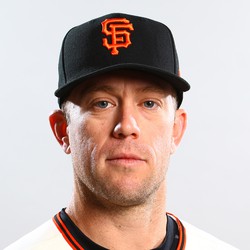 Giants second baseman Aaron Hill went 1-for-3 with a solo homer and a walk on Thursday against the D-backs.

Hill made his first start of 2017 count, as the veteran smacked a third-inning blast over the wall for his first homer of the season. Hill got the nod in place of Joe Panik before being double-switched into left field, as the age-35 bat doesnâ€™t have a true starting job on this team right now. He can still provide some pop, as he hit 10 homers in 429 plate appearances last season, but his performance here doesnâ€™t warrant any action from fantasy owners.