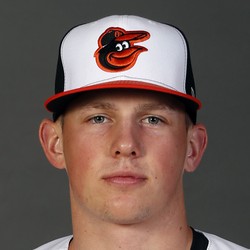 Adley Rutschman, the Orioles top prospect and first overall pick in the 2019 draft, was left out of the Orioles' initial 44-man player pool that was released on Sunday.

Rutschman did not figure to make his big league debut this year, but he was expected to make the auxiliary roster to continue his development. With 16 spots still open, Rutschman will likely be added to the roster over the next week or two.