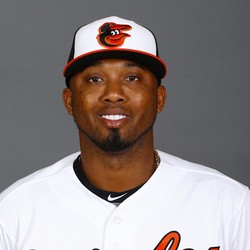 The Orioles have signed shortstop Alicides Escobar to a minor league contract that includes an invitation to Spring Training.

Escobar, 32, hit .258/.293/.343 with 41 home runs in 11 major leagues seasons. Escobar has very little power as he homered only four times in 531 at-bats last season. He’s has also averaged 155 games per season in eight seasons with the Royals. Even if he wins the shortstop job in Baltimore, his upside is limited and provides little to no fantasy value.