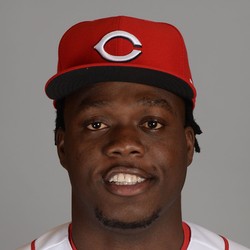 Aquino came out of the gate absolutely blazing but came to a screeching halt. Even so, he finished the year with 19 homers and 7 steals in just 56 games played. His ceiling is obviously immense but if he doesn't hit from the start, he may end up back in the minors before long.

Reds OF Aristides Aquino is on the team's auxiliary site roster for Spring Training 2.0.

Aquino burst onto the scene in 2019, belting 19 homers and posting an .892 OPS in just 52 games. He also stole seven bases during that stretch. However, he struggled in Spring Training 1.0, which might have led to this decision by the Reds. It's certainly an odd move that knocks him down draft boards for now. Meanwhile, it's great news for Jesse Winker and Nick Senzel.