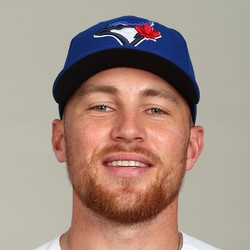 Brandon Drury went 2-for-5 at the dish in Monday's home contest against the Rangers. Drury got the Blue Jays on the board in the second inning with an RBI-single. He then capped off an 8-run 4th inning with his first career grand slam.

Drury now has eight RBI in his last five games and he's found a pretty consistent home in the Blue Jays' lineup, but that doesn't mean he should be on your fantasy radar.